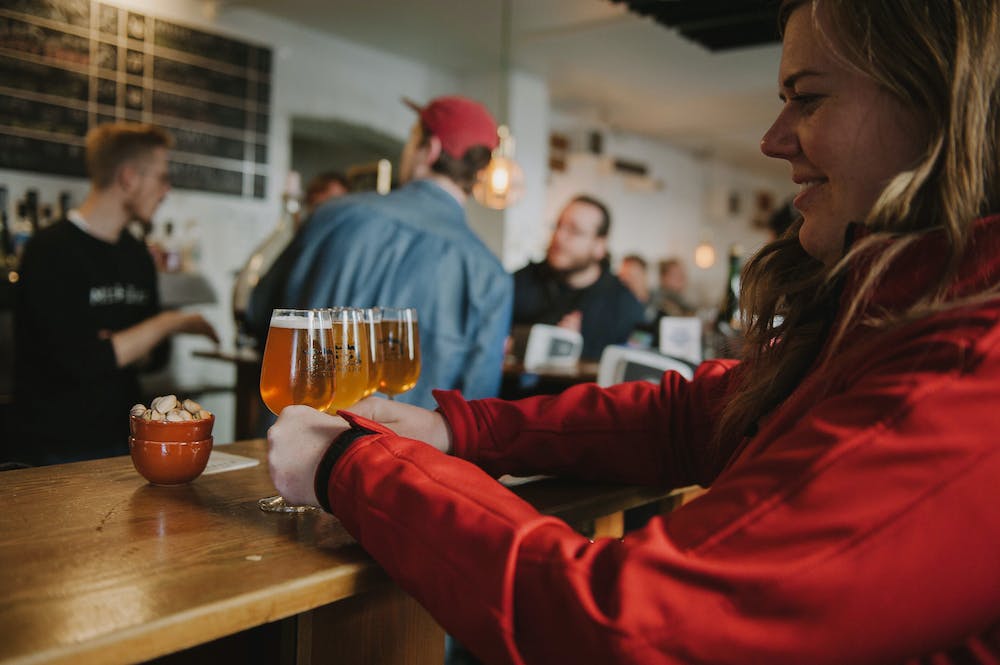 When we bring our guests on in particular our Vesterbro Beer Tour, they always know at least one very famous beer brand: Carlsberg. The Danish brewers have been a powerhouse when it comes to putting its mark on the history of beer for over 135 years now. Back in the late 1870s, J. C. Jacobsen had a great passion for beer and he strived to combine it with his passion for natural sciences. These two passions revolutionized beer as they knew it back then when Carlsberg professors bred the first pure strain of lager yeast in the brewery’s laboratory, developed the pH-scale we use so widely today and the Carlsberg brewery continue to contribute with scientific contributions all over the world even to this day.

As such, it does not surprise us that beer geeks from all over the world flock to visit Carlsberg and its museum, brand store, brewery and its visitor centre every year here in Copenhagen and go on their guided Carlsberg tours and experiences. As fellow beer geeks, we appreciate the brands history and maybe as one of the most iconic beers in the world… probably 😉 That’s also why, we are saddened this year to report that it is not possible to visit the brands museum, brewery and its visitor centre this year, although their brand store will be open for you to buy merchandise every Tuesday to Thursday from 11am – 3pm.

Luckily, Carlsberg have not lived in vain. Today, Copenhagen is a beer hub, where this alcoholic beverage really have come to its right. From previously being nearly enjoyed exclusively in old, smokey bodegas, Danish micro-breweries have begun viewing the simple enjoyment of beer as a gourmet experience where they widely experiment with different tastes and styles of beers. Some of the newer beer-bars even incorporate Nordic ingredients and flavors into their products, while others take a strict value-based approach to the beer-making process. For beer geeks, Copenhagen is a paradise if you just know where to look for it, so here is 4 of our favorite breweries and bars to enjoy golden brew among like-minded enthusiasts.

Beers from People Like Us used to be difficult to find in Copenhagen, but luckily they just settled in at a brand new bottle shop at Vermlandsgade 2. We have been huge fans of this brand for a long time and always used to include their beers in our Vice & Vesterbro tour, since their story is worth sharing. The brewers behind all of their beers take a value-based approach to brewing beer, where they want to embrace diversity and that’s why all of their beers are exclusively created by autists since they believe it is good for you to meet people like them. World-famous people like Hans Christian Andersen, Charles Darwin, Albert Einstein, Bill Gates and Sir Isaac Newton were also considered autistic, so just imagine having an autist with their sense of detail brewing your beer! 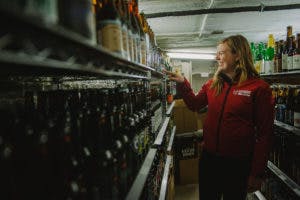 Discover the best beers with a local

The brewery that have wooed the locals. In 2018, Brus was awarded with the title as the best bar in Copenhagen and with good reason! Unfortunately, beer geeks often miss it, as the name ‘Brus’ just does not ring a bell. We think that is a darn shame, since the brewers behind this fantastic and very stylish brewery is no others than the guys behind To Øl! You won’t find any other place in Copenhagen, where there is a shorter route from their large fermentation tanks to your throat. Grab some of their lovely snacks such as their burgers, pork rinds or fermented fries, be sure to ask the bartender what sides and beers that compliments each other really well. Sometimes you can also be lucky enough to show up at one of their fantastic events (but with no rowdiness, since a proper beer in-hand remains the most important aspect of your visit): Our favorite is by far their Thursday happening ‘Barselsbar’ (i.e. maternity/paternity bar) where new mom and dads can show up and enjoy themselves with a beer with like-minded beer enthusiasts. 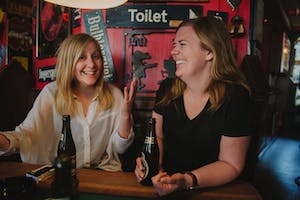 Enjoy a cold one over a fun stimulating chat.

The second most known beer brand after Carlsberg in Denmark these days may probably be Mikkeller. Mikkel Borg Bjergsø is building an empire here in their home city and most beer enthusiasts know their beers! Their tucked-away Mikkeller Baghaven on Refshaleøen is though still one of our favorite breweries in town though, since the industrial bar has a cool urban feeling to it with amazing views over Copenhagen’s harbor side and their specialty rustic farmhouse ales and wild ales are just incredible. But also because this specific place represents the same virtus as J.C. Jacobsen had, where they solely use ingredients from their surrounding environment and the science of microbiology to create their very interesting golden brews.

Hit Copenhagen’s cobblestone streets with a native in the evening and discover the secret ingredients to a great night on the town with a hearty dose of Danish hygge.